Use mediation to resolve disputes on your terms…part.6

Arbitration has traditionally been a popular method of dispute resolution in workplace, construction, businessdisputes and securities regulation, but is gaining traction in other areas such as Family Law.

The popularity of arbitration can be attributed to it being mandated in some cases but also to the relatively short amount of time it takes compared to going to court for a trial.

For example according to this article from the US, from the time of filing to decision, arbitration takes an average of 475 days, while similar cases can take up to three years in court.

And although it costs roughly $3,000 to $4,000 per day plus legal representation and preparation which will also be costly, the time saved on the numerous interim hearings, reports and the trial in a litigation case will usually result in an overall saving in cost as well as time with arbitration compared to litigation.

Because of it’s advantages as a viable alternative to court, some arbitration proceedings are mandatory, while others are independently enforced by contract.

Other countries around the world are also recognizing the potential of arbitration. In Europe, arbitration has become the default for international disputes, and countries like Canada, Brazil, and Australia have shown increases in commercial arbitration, with strong government support.

The worldwide movement to embrace arbitration is a clear indicator that the process works. 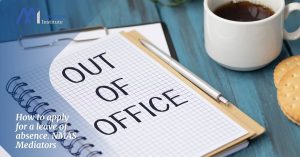 How to request a Leave of Absence – NMAS Mediators

Find out what is required for NMAS Accredited Mediators to take a Leave of Absence temporarily suspending your accreditation. 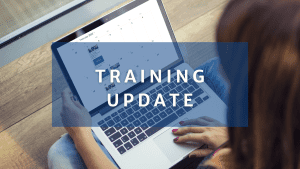 Monthly training update from Mediation Institute. Recap of this month and looking forward to next month. 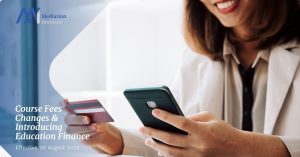 Mediation Institute Course Fees and new Education Finance information providing advanced notice of changes to our course fees which will take effect from the 1st August 2022.

Choosing between Mediation, Conciliation or Arbitration

Mediation, conciliation and arbitration are all forms of ADR where a neutral third party is tasked with helping disputants resolve their differences.

The benefits of each are similar when comparing them with going to trial. They are faster, less expensive, and less adversarial than litigation.

All of these methods also have support from the Australian governments in the form of mandatory participation in certain circumstances and in certain regions.

However, there are vital differences between the three processes.

All processes can be legally binding, but it is more common to apply mediation in a non-binding way.

Conciliation generally takes place as part of a court process and the court will turn any settlement reached into Orders by Consent.

Awards made in arbitration is always binding. Arbitration acts as a simplified, but still legally enforced, replacement for litigation.

Mediation generally requires specific legislation to make a mediated agreement legally binding, such as Farm Debt Mediation where the mediated agreement is signed on the day and legally enforceable. In the majority of cases mediated agreements need to be formalised as Court Orders through an application process or turned into a contract if court orders are not appropriate.

Because of this difference, there is also a difference in the power of the arbitrator and the mediator and conciliator.

Arbitrators have full power to decide the outcome of the settlement, but during mediation and conciliation, the power to make decisions lies with the disputants. The mediator or conciliator can’t force the parties to settle.

The number of people involved is also usually different. Arbitration may involve a panel of arbitrators who discuss the evidence and make a joint decision although in the Family Law context is it more common to contract a single arbitrator.

Conciliation is generally conducted by a single court appointed conciliator.

Mediation often involves a single mediator but some services or situations use a co-mediation model with two mediators who work together to facilitate the process.

Overall, arbitration is a more formal and controlled process that acts as a kind of private court proceeding, conciliation is a court diversion process to try and resolve the matter early in the court process and mediation is more informal process which can take into account what matters to the parties and not just what the relevant legislation says. The process used in mediation can vary depending on the needs of the disputants and the style of the mediator.

All three options will save time and money over litigation, but mediation is the least expensive and most empowering of the three processes.

The more directive style of ADR conciliation is used when parties have not been able to reach agreement in mediation or have bypassed mediation and gone straight to court.

Arbitration takes the decision out of the hands of the disputants and is used when they are positional in their arguments and will not work together towards a collaborative win/win outcome.

Disputes are an inevitable aspect of human life. There have always been disputes in all societies throughout history and will most likely continue to be disputes.

In the past, and unfortunately still in many parts of the world, disputes frequently escalated into war and people and countries fought to the death to try and win their conflict.

On  a brighter note in civil society dispute resolution has evolved to provide people with a number of forms of Alternative Dispute Resolution to help them to resolve their disputes when direct negotiation hasn’t worked for them.

As you have seen ADR is the general term for a variety of processes ranging from the informality of mediation through to the private court of Arbitration which have in common the intervention by a neutral third party to facilitate the process. Mediation is one of the most common forms of ADR, due to it’s high success rate (86% by some measures) and relatively low cost.

Mediation is all about facilitating communication and gives the control of the resolution to the disputants.

Conciliation is often a last ditch effort to avoid a trial and the focus is on making and considering settlement offers and the recommendations of the conciliator. The final decision about accepting an offer is up to the parties as they can’t be forced to agree in conciliation.

Arbitration is unlike mediation, disputants give control of the settlement outcome to the arbitrator or arbitrators who review the facts and evidence and decide on a legally enforceable decision.

Arbitration saves time and money over litigation, but mediation is the most cost-effective solution.

Use the comments to tell us about your experiences with ADR.

Use mediation to resolve disputes on your terms…part.6 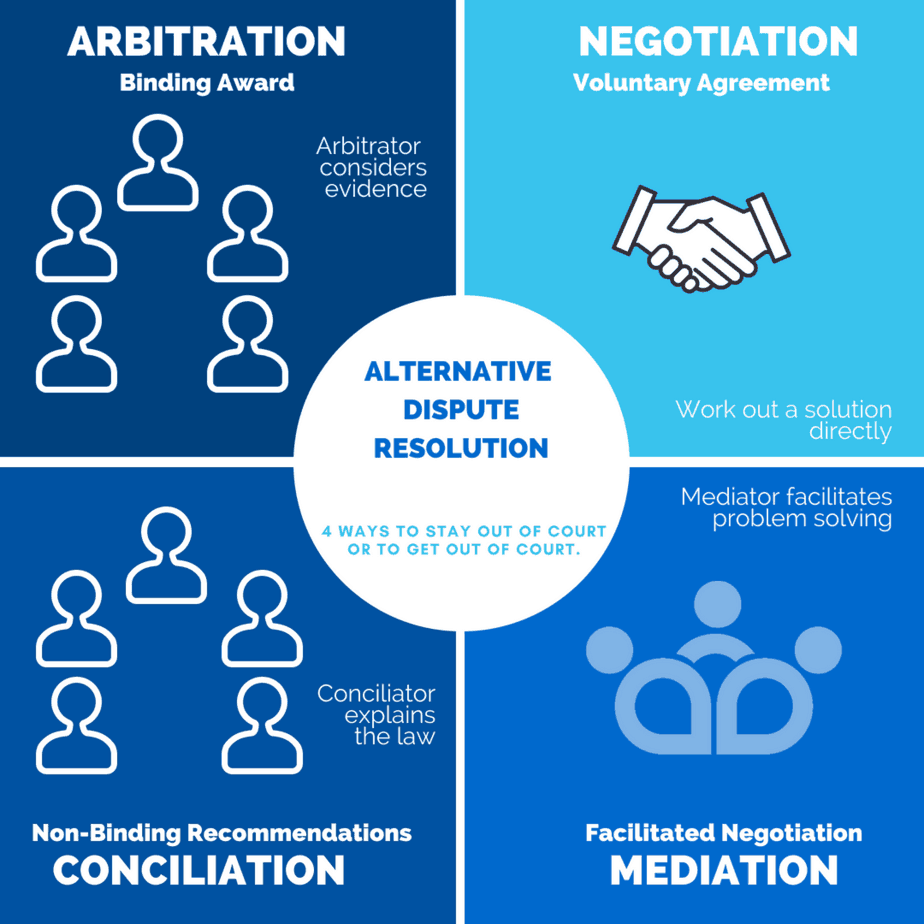 Mediation Services Use mediation to resolve disputes on your terms……
0